Mayor of Phoenix, Greg Stanton, will proclaim every 3rd Saturday of November “Hip-Hop Day” on November 19th at the 3rd Annual Arizona Hip-Hop Festival. The holiday will be put into effect to celebrate all elements and forms of Hip-Hop culture in Phoenix. 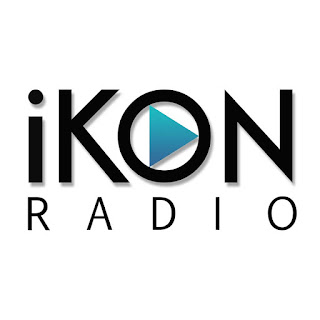 The Arizona Hip-Hop Festival is back and bigger and better than ever with over 7,000 people expected in attendance this year. Comerica Theatre, and some of the surrounding streets that are shutting down for the festivities, will be home to 8 stages, nearly 100 vendors and over 200+ performers for the day. The festival will also have representation of all the other elements of Hip-Hop besides emceeing. Just Blaze, Home Depot and Behr paint have sponsored a graffiti art competition and will be displaying art from some of the most talented street painters in the city. 3 nationally recognized DJ’s, including RedBull champion DJ Akshen, will be teaching the art of turntablism & scratch techniques throughout the day. Attendees will also get to mingle with over 40 producers on the “Beat Street” panel and listen to their instrumentals. Some of these Grammy nominated and platinum producers will even be educating on the subjects of musical software, hardware, style and techniques. There is even going to be a low-rider car parade on 4th ave and Washington in the afternoon. 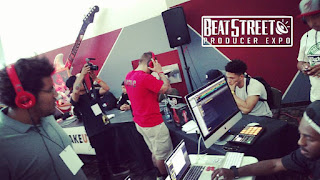 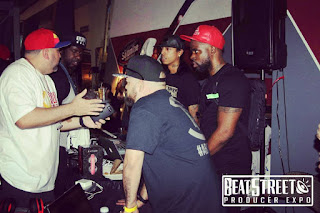 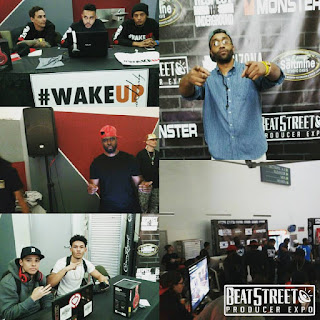 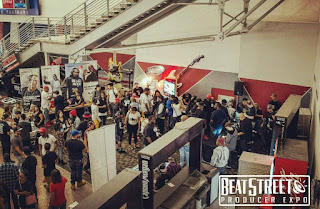 The Arizona Hip-Hop Festival is a great event for the youth. “Rising Dynasty,” a children’s b-boy/girl dance group, will be performing the art of breakdancing. 2,000 free tickets are being given away to the 17 high schools in the Phoenix Union School District for perfect attendance and improvements on grades and behavior for students. On top of that, kids under 12 years old get in for free. Children and young adults can also perform and participate on the open mic stage when purchasing a ticket or receiving a free voucher for the festival. 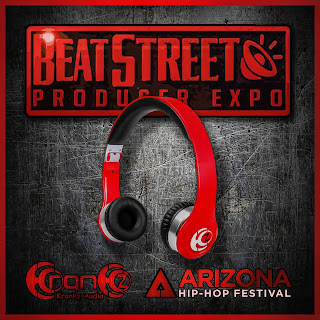 The BeatStreet Producer Expo was created for local beat makers and producers to have their own exposure. I've come across so much talent in AZ over the last few years. As the hip hop scene grows and births new artists every day, we tend to forget about the people behind the mlusic. I wanted to bring forth an event to the festival that allowed producers to not only receive exposure but also have the ability to network with the artists and other producers directly. In year 1, so many of the artists were able to establish contact and build relationships. Featured producers will have the opportunity to showcase their music to those in attendance through personal work station demos and showcase features.

This years expo will include those with major industry credits as well as many fresh upcoming producers who are just making a splash in the AZ industry. J Slugg of No Limit Forever Records, Nov The Zoner, Deztined, Jiggalo, Checkin Trapps & more. The expo will take place in a designated area in main lobby concourse. BeatStreet will run all day.  Krankz Audio by Exeo Entertainment is our official sponsor and will provide headphones for all involved. 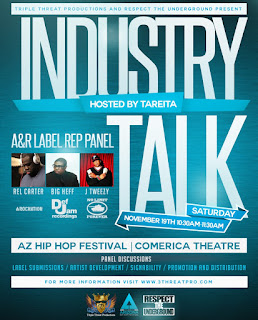 The festival is also excited to introduce an elevated “Industry Talk” panel which includes 3 major label reps from Def Jam, Roc Nation and No Limit Records.  The “Industry Talk” panel is sponsored by Triple Threat Productions and will be moderated by Tareita Nephew (Artist Manager) from Triple Threat.  The panel goes from 10:30 am to 11:30 am. Performers will have a chance to submit their demos/press kits for collection so they can be provided to the label reps for future consideration/review.

In the morning, scheduled performers will be able to submit their demos to 3 major label reps from Def Jam, Roc Nation and No Limit Records. The headliners of the festival this year will include big names like: Vee Tha Rula, Bag Of Tricks Cat, Cryptic Wisdom, Twisted Insane, J Slugg & Nano of No Limit Forever Records, Odd Squad Family and more.

The Event runs from 10:00 am - 10:30 pm and will be followed up with an official After Party at Monarch Theatre 3 blocks down the street on Washington. The Festival is Presented by: Fresh Empire. 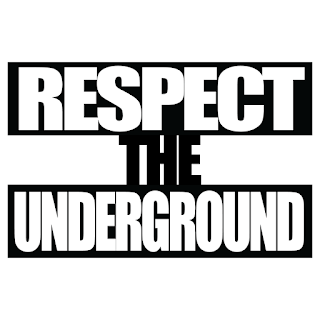 About Respect The Underground
Respect The Underground is a Phoenix based multi-layered entertainment company and has been providing an outlet for underground artists since 2012, consistently selling out local events as well as co-producing many successful national events. The business is steadily growing, gaining national attention as it expands to Tucson, Colorado, Las Vegas & beyond.

For more information, visit www.respecttheunderground.com or www.azhiphopfestival.com
Posted by Chronic Behavior LLC at 4:23 AM No comments: 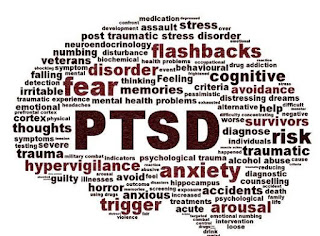 Film & Fashion Futures and Chronic Behavior LLC support many causes and events in the community.  This particular event is one that is being offered to provide healing to those who suffer from PTSD and have past traumatic experiences. See the press release below.  You can also visit the website, Help Me PTSD, to learn more about the ticket prices and how you can attend.  Purchase tickets by visiting this site ==> http://helpmeptsd.org/powerful-ptsd-and-past-trauma-healing/

Additional local speakers for the event also include Robin Cote (Author of 'My Life, Victim No More'), Tray Goodman (Author of 'Crushing Your Box'), and Kristi Fowler (Author of 'How Could This Happen').

This seminar will be raising (if sold out) $8,000 that will be donated to Healing Americas Heroes.  You can find more information at www.healingamericasheroes.com

To schedule an interview or for questions regarding this workshop/seminar please contact: Christopher Lengyel @ 480-749-4840